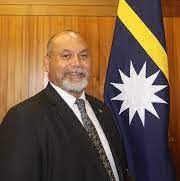 Aingimea studied law in Australia and subsequently worked for the Regional Rights Resource Team NGO, and as a public defender in the Marshall Islands. He later worked as a lecturer in law at the University of the South Pacific.

Aingimea ran for election to Parliament in the Meneng Constituency in 2013, but failed to be elected. Following the elections, he joined the new administration of President Baron Waqa as Secretary for Justice.

Shaping Pacific Futures with the President of the Republic of Nauru